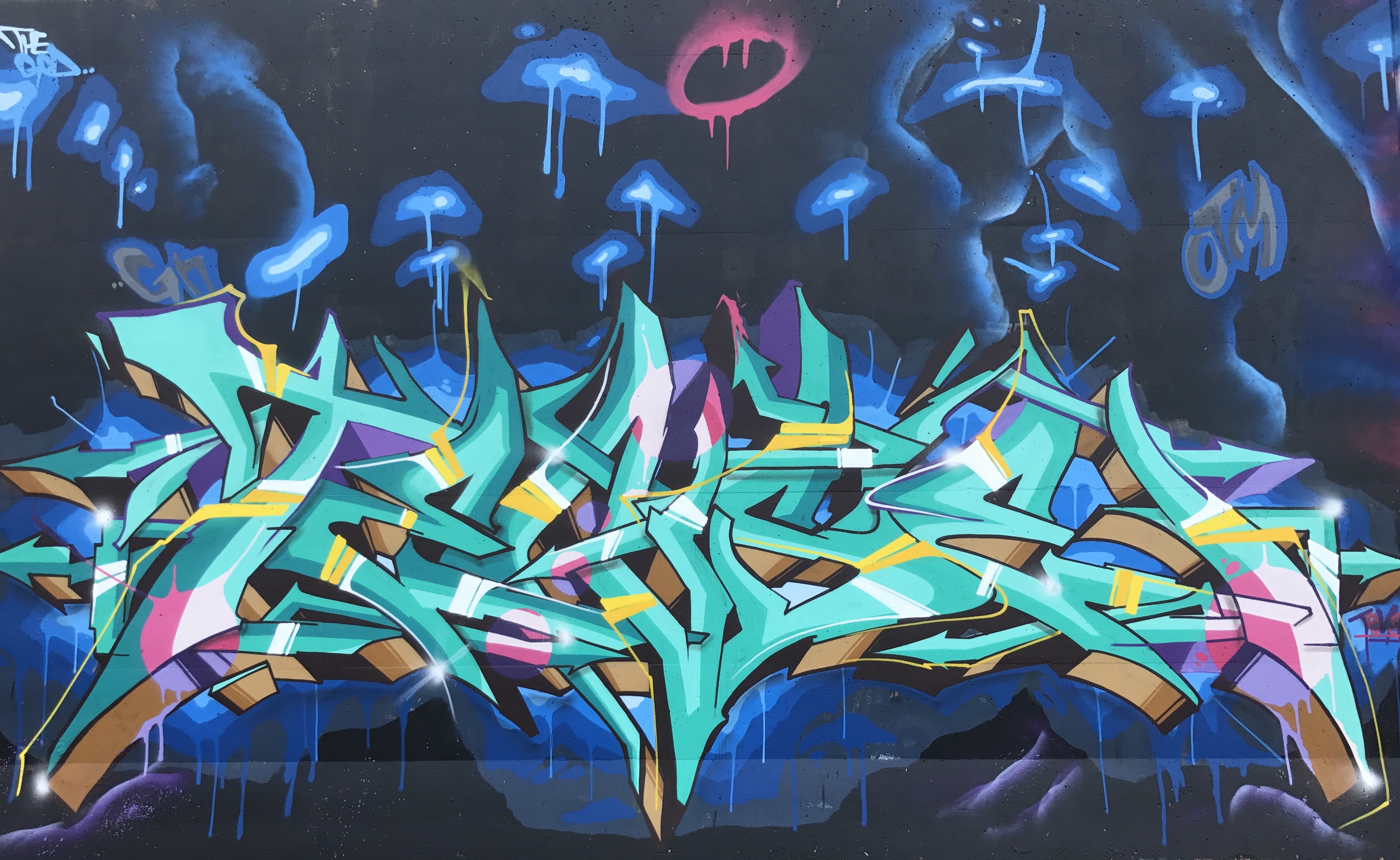 Born in 1986 in Boston Massachusetts, Joel Lewis is one the leading graffiti style technicians of his generation. His rhythmic funky bar style was born from the influence of many artists in the Hiphop culture. Influenced by artists and peers such as Merez, Percy F. wright, Doves, Vase, Kem, Soem, Problak, and Salim Elijah, Joel strives to transmute the energy of his emotions into each piece that he paints on the street while remaining confined in intense style and line precision. In the 7th grade at The Benjamin Banneker Charter School, he and his best friend Salim Elijah from Brooklyn N.Y. painted their first graffiti production inside of the school cafeteria with the permission of the principal at the time .The Letters spelled out B.B.C.S. with a character next to it. It was that moment that began to shape my identity and pave the path that I would soon blaze as a writer. In 2001 he entered Boston Arts Academy as a freshmen Visual Arts major. His highschool career was comprised deeply of finding the balance between the contemporary arts and graffiti through the work he produced. He soon realized that the integration of fundamental art technique mixed with his unorthodox letters would cause his style to go through many phases as his personal life did as well. In 2001 he began as an apprentice at Artists For Humanity where he was further introduced to a wide range of artist, techniques, and possibilities as a young artist. AFH was a place that welcomed him has a writer as well as opened his eyes to painting from life and reference. In 2003 he was hired by the Mural Crew to join a team of local city artists and collaborate on large scale murals around the city of Boston. The biggest jewel he took from this experience was scaling and how small images are transferred onto buildings to look the same as the original image. In 2005 after an art auction at the Cyclorama in the South end of Boston where one of his paintings of a Buick was sold, he was interviewed by Liz Walker of CBS channel 4 which aired on her show at the time called Sunday with Liz in an episode entitled “Power”. That same year in 2005, he graduated from BAA and went to Johnson & Wales to study Culinary Arts. This was a critical period in his life where his paradigm began to shift as an artist. As the time demand began to increase as a cook and student, graffiti appeared to be on the back burner. Although he was pursuing his education as well as a trade that he loved, there seemed to be something missing. In 2007 he left Johnson & Wales and held several jobs as a cook in the state of RI. It wouldn’t be long before he filled the void by linking with crew members and getting back to what he loved to do. In 2008 he relocated from New England to the lone star state where both his life and graff style would take a drastic turn for the best. He found new walls, connected with owners, jumped into the art scene of Dallas and connected with writers who soon would become his lifelong friends. He painted both for commission and for the love of it. In 2010, he again relocated back to New England with the attitude of a winner destined to use his graff skills in a way that could influence all. He worked for the next couple years as a afterschool group leader/ art teacher for 5-12 year olds. In 2013 while working for an organization called CollegeBound Dorchester, he was promoted to the position of College Readiness Advisor. His role was to deliver “Strategies for Success” lessons to high school students at Charlestown High School using the history of Hiphop and graffiti sub culture as a vehicle of creative motivation. He would facilitate life skills activities such as creating collages and vision boards based on their individual life interests and attractions. He also facilitated a graffiti course as alumni at BAA in January of this year. His talent, drive, and enthusiasm has had an influence on many old school graff writers who felt like they had to retire and he encouraged them to dust off their style and paint. The connection that Joel finds between Graffiti and life is that it’s a perfected freestyle where the fill represents the elements of the personal life, and the outline is how those elements are managed, squared and defined.