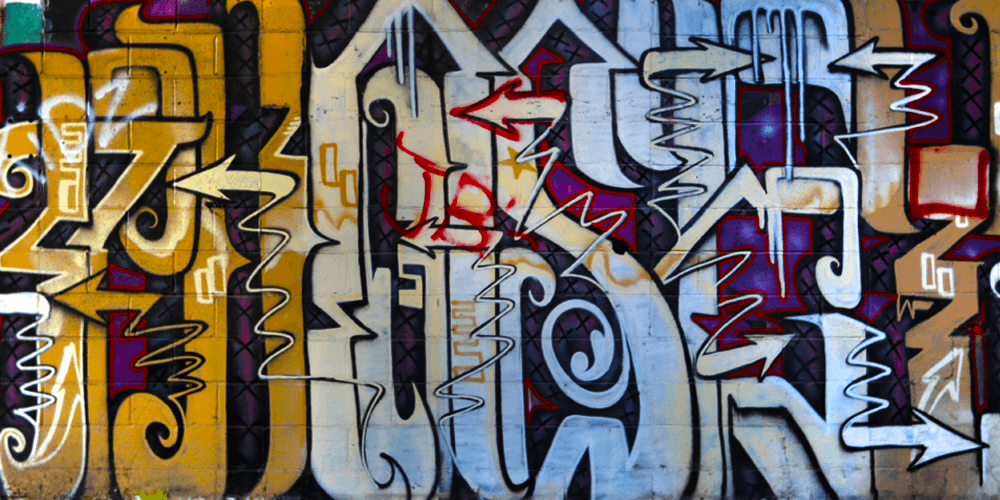 Graffiti: Art for the Lucky

Drive anywhere in Memphis and you’ll see it, hiding in alleys, looming high on overpasses, gracing abandoned warehouses, donning ditches and culverts, painted on the sides of dumpsters, buildings, and trains. You may try to ignore it, but it’s there, when you go to the movies, drive to work, walk down the street. And in Memphis it’s changing, moving, expanding, rising, and becoming much more than a name scribbled on a wall. 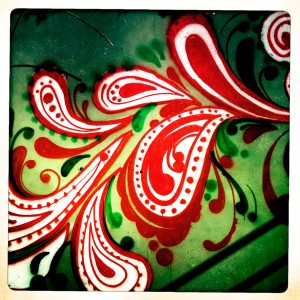 Art.
Graffiti has a lot of names, but very few faces. Two of those names are Nosey and Rakn, their graffiti writer names, that is. And they, and their friends, are changing the face of graffiti in Memphis. Trained, some in painting, in graphic design, others by their mentors and fellow graffiti writers, these guys (and a few women) move at night, in hidden spots, showing their work to the lucky few who pass by before the work gets “buffed” by owners of the property or the Memphis City “beige team.” As Rakn says, “The beauty of graffiti is that it’s temporary. It’s not meant to last forever. And only the lucky ones get to see it before it disappears.”

Their work appears in lots of illegal places in town, but they are also opening graffiti up to art lovers, appearing on permission walls, commissioned for public art projects, and showing in art galleries. Placement, it seems, is as important as content for these artists. Writers weigh the dangers of the art, getting arrested, fined, and injured with finding a place where their piece can “ride,” or remain untouched for a long time. Bigger isn’t always better, though it can be impressive, according to Nosey: “A lot of times, instead of writing my name huge across a surface at eye level in plain sight, I’ll pretend to tie my shoe and write something really small on a piece of metal stretching out across the sidewalk,” because “even if it’s 42 feet tall, staring them in the face, a lot of people will not so much as glance at graffiti, because they don’t care about being connected to their surroundings.” 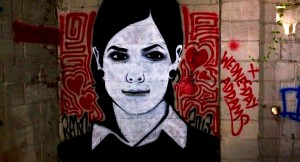 Graffiti writers stay connected to the world around them, scoping out spots as they ride around town, sometimes considering the consequences of their actions, and other times painting because they want to, they need to. Rakn says, “I do it because I have this extreme urge to leave something behind for when I’m not here. Once I’m gone, I want a physical part of me left here that people can remember. I can recall when Tues a graffiti writer from Kansas City died, the city was covered in RIP Tues tags, throwies, and pieces. I thought the idea of living on through graffiti was the coolest thing ever.” Like any art, the creativity of it keeps the artists working to better their craft, collaborating but also competing with other writers for the best pieces, while paying homage to those who came before them. Nosey knows the compulsion that Rakn mentions well: “I do it for myself now more than anyone. If I go more than a couple of days without making something, whether that be graffiti, or an illustration, or a painting, or a sketch; if I go more than a couple days, I’m depressed.” City-owned property seems to be a prime target, as some graffiti writers feel they pay taxes, and therefore, own part of that property. In looking at the Memphis cityscape, Nosey makes the point that advertising affects us negatively far more than graffiti ever will: “Marketing and advertisement has woven its way into the moral fabric of everyone and made consuming the ultimate goal. So I think I could also make the argument that writing my name on city property is really pretty innocent in the grand scheme of things.” 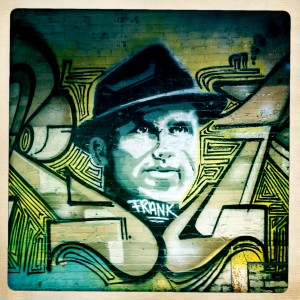 People complain about graffiti, even the work that’s done legally, critiquing its lack of skill, simple techniques, and cheap materials. They think of it as a sign of danger, that criminals are moving in, marking their territories, and gangs will start taking over the neighborhoods, pushing drugs and prostitution, moving into a kind of chaos, all driven by the mere presence of paint on walls. It’s $3.58 for a can of spray paint, which reeks fear in the calmest businessman at the sight of it on his parking lot wall. But I’m not sure they’re looking hard enough, these people who find fault in the artistic endeavors of these writers, most of whom just want to honor a historical figure, demonstrate their skills, or say, “I was here. I am here. I have a name. I’ve made my mark.” Nosey sees the variety of artistic ability in graffiti writers: “A piece can shout, I WAS HERE. ”Some people shout louder than others. Some people try to shout, but it ends up looking like they have a speech impediment.” 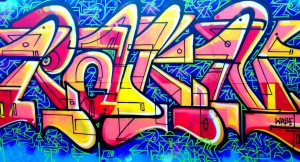 Their materials are simple and cheap, by necessity. They use mostly spray paint, permanent markers, and an occasional paintbrush, all of which must be easily transported, light enough to run with, and stable enough to survive the elements in outdoor locations. Unlike studio artists, their connection to their palette extends into their art. They turn imperfections into highlights of the work. Surfaces become integrated into pieces, a hole becomes a monster’s mouth, a crack becomes the water under a fish, a corner holds a surprise around its edge. Danger and adrenaline become part of the process, as Rakn notes, “I love getting that natural high of adrenaline, going out and risking everything for some silly painting on a wall or train. You never know what’s going to happen when you are out painting. The uncertainty has kept me addicted for years.” 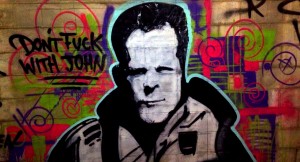 It must be the adrenaline, because it’s definitely not the pay. Graffiti artists rarely ever get paid, relying on other jobs to support their artistic habit. Most artists work in a medium, whether it’s canvas, in metal, or clay, that they can transport to a gallery or sell to an individual or a company. Graffiti artists are unique. They can’t sell their work, which would seem to be a drawback, but it also opens up their audience. Nosey understands the value of accessibility to his art: “Graffiti is cool for the fact that you don’t have to pay money to go to an art gallery or a museum to see it. It’s free expression; it’s for anyone who wants to appreciate it.” In that way, everybody owns graffiti. 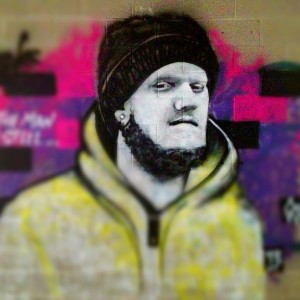 It’s not as if they are new to the craft. Both Rakn and Nosey started as kids, around age 8, when someone pointed out graffiti to them for the first time. A brother, a friend, a father, who drove them around, took them in the yard, showed them (usually with appall) the graffiti on a wall or a ditch, and it piqued their interest straight away. Rakn says, “My interest grew because I started to pay attention to every surface that could be painted in the streets.” Nosey, after seeing graffiti in his back yard, started “seeing” graffiti, as if his eyes had finally been opened to it on that first sighting. “After I noticed it that once, I noticed it everywhere. I always admired it, no matter how terrible it might have been.” Both tried their own hand at it around age 13, but neither got a name, and enough courage to paint seriously until their late teens. “When you’re a toy, it’s some of the best times, because everything is new;” Nosey says,” it’s also some of the worst times, because everything is new. You get treated pretty bad by the more seasoned writers, and you start out with zero respect. You have to find spots to paint, learn the etiquette of painting, the do’s and don’ts, what kind of paint works well, and what kind is cheap.” After meeting other graffiti writers, they finally felt comfortable to experiment, working in groups, collaborating on projects, and even painting alone. Now in their twenties, both men have started creating pieces (short for masterpieces) that must be considered as “art” by even the harshest critics. They are both trained, formally and informally, and they use those skills to hone their craft to the finest in Memphis. 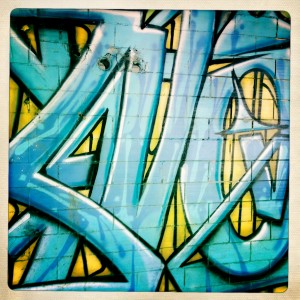 Several factors have changed graffiti, but the internet is one of the biggest influences, allowing toys to make a name for themselves overnight, providing inspiration and designs to a wider audience, and connecting graffiti writers all over the world. “Toys have it easier today because they can paint ten pieces, put them on their Flickr account or Instagram and it looks like they’re crushing. They can become a king overnight,” Nosey says. But being a king takes more than just a virtual medium. They have to learn the craft, the materials, the spots, and make a name for themselves not just within the graffiti community, but within the community at large. An appreciation of this transient art by non-artists is high compliment to these crews.
So, take another look, the next time you’re driving down Madison Avenue. Look over at the roof of the P&H. Or at the back of the Palace Cinema down on Summer Avenue. Look in ditches, like the one next to La Baguette. Look up at trestles where the train has stopped. Or look down at the sidewalk. Look closely, because you might miss it. It’s there, if you take the time to notice: throwups, tags, names, pieces, art. Graffiti is here. They are here. And they have a name. You’ll be surprised: some of it is better than the “art” you’ll find in galleries and museums. But you have to look fast to be one of the lucky ones.